September 29, 2014 – Los Angeles, CA – My move from my native Colombia to LA was full of  new experiences. One of the first, exciting things that happened to me was the Mentor Program offered by the Society of Composers and Lyricists (SCL).

When I saw that the SCL was accepting interns for the Mentor Program (Fall 2013), I sent in my application and my best demo. A couple of weeks later, I received my acceptance! I was very excited for my first step as a composer out of school, starting to see the real world.

The first meeting took place at composer and SCL Board member Chris Farrell’s studio, who gave us interns an introduction of how the program would be. After that, we had the opportunity to talk to Emmy-nominated composer Miriam Cutler; Hollywood percussionist MB Gordy; lawyer, and writer of the book “Music Publishing – The Complete Guide”, Steve Winogradsky; three-time Emmy Award-winning composer and Director of audio/video for Blizzard Entertainment Russell Brower; President of the SCL Ashley Irwin; and recording and mixing engineer John Rodd.

The highlight of the program was attending the recording sessions. The first one I ever attended was of the world-renowned animated TV Series The Simpsons, at the historic Newman scoring stage in FOX Studios. It felt very special witnessing the music for one of my favorite TV shows being recorded. The best moment was hearing the main theme played by the orchestra for the closing credits (in a great arrangement for band). Afterwards, I had a short conversation with the man behind the music of the show, Alf Clausen. I have the utmost respect and admiration for him, for his amazing work through the years.

I also attended the sessions of the show Family Guy, scored by Ron Jones, and the movie Rio 2, with Oscar®-nominated composer John Powell. This last one was very special because sessions for TV are slightly different from sessions for features. The orchestra is bigger, and usually, the cues are longer. While we were in the stage for the first part of the session, we were invited by John Powell to sit in the booth (as he said, ‘The experience is totally different’). And yes, it was!

To sum up, the whole program was a very rewarding experience, affording me a glimpse into the inner workings of music-making in Hollywood. I thank the Society of Composers and Lyricists, and especially Board member Elizabeth Sellers, who was my main mentor. 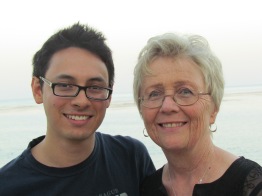